A unique perspective on the business of sports.

A few excerpts from articles talking about the #Sportsbiz from the week of September 4, 2016 … END_OF_DOCUMENT_TOKEN_TO_BE_REPLACED

A few excerpts from articles talking about the #Sportsbiz from the week of August 28, 2016 … END_OF_DOCUMENT_TOKEN_TO_BE_REPLACED

A few excerpts from articles talking about the #Sportsbiz from the week of August 14, 2016… … END_OF_DOCUMENT_TOKEN_TO_BE_REPLACED

Teams in the National Hockey League (NHL) have competed in 18 outdoor games since the beginning of the 2003-2004 season. The outdoor games were made popular by the ‘Cold War’ ice hockey game between Michigan State University and the University of Michigan in October of 2001. The game was hosted at Spartan Stadium and hosted 74,544 fans, filled to 103.4% capacity. It was a then-world record for the largest crowd at an ice hockey game, a record that would stand until The Big Chill at the Big House, a rematch in Ann Arbor that would raise the bar to 104,173 in December of 2010. The NHL would not take the record for the largest attended ice hockey game until 2014, when they would host their own game at the Big House. The NHL has spread the games out with 16 different teams hosting outdoor games and another 5 participating in these major events in 17 different venues (Yankee Stadium was the only repeat venue hosting two Stadium Series games in 2014). … END_OF_DOCUMENT_TOKEN_TO_BE_REPLACED 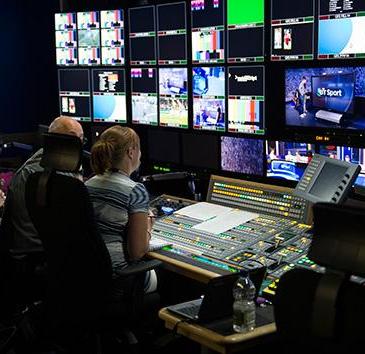 One way that ESPN has been able to cut costs, without compromising the high quality of their broadcasts is by implementing more of an “at-home” workflow. Since NBC heavily relied on an “at-home” workflow at the 2008 Beijing Olympics, profiled in the October 2008 issue of Broadcast Engineering magazine, the other networks have looked into ways to incorporate this workflow in to their own events. … END_OF_DOCUMENT_TOKEN_TO_BE_REPLACED